You might have noticed: we have quite some people who love to cook and bake in the CaDansa organisation. During normal times, we like to have our meetings in person and have a nice meal before discussing all things CaDansa. It can be difficult to cook for a larger group, especially if there are people with allergies. That’s why the following recipe is great: there are few people who can’t eat it! This recipe was originally made bij De Groene Meisjes, but we’ve changed a few things (and translated it for you). Fun fact: you’ll probably know kale as a superfood. In the Netherlands, it’s considered a bit old fashioned: we’ve eaten it in a kind of stew for ages. 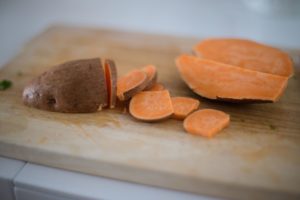 Recipe
Not a lot of cutting this time around, which is great for a weekend filled with dancing. Peel the sweet potatoes and cube them. Finely chop the onion.

Put the sweet potatoes with the cubed tomatoes, chickpeas (drained), broth and red onion in a soup pan. Bring it to a boil, lower the heat, cover the pan and let it simmer for 15 minutes. In the meantime, cook the rice according to the instructions. Did you get some (vegan) smoked sausage? Do check how to prepare it, brands can differ!

Add the spices and stir. Place the kale on top and cover the pan once more (without stirring!). This way, the kale can steam for a bit. After 1 minute, stir the pot through and let it cook for another 2 to 3 minutes.